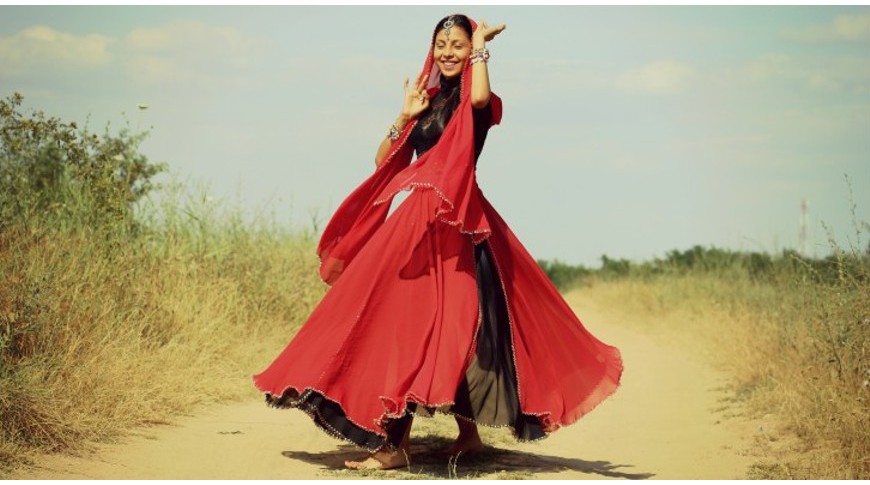 The history of belly dancing transcends many cultural boundaries, beginning in the Middle East and Africa and continuing to evolve in Western cultures as a form of cultural dance and exotic entertainment. In the 21st century, this genre has gained considerable popularity around the world.

The term "belly dance" is a westernized name that originally referred to traditional dance in the Middle East. The earliest forms of belly dancing were the Egyptian Ghawazi dance during the 19th century and Raqs Sharqi, the Arabic dance of the 20th century. Despite Egypt's location in Africa and contributions from other nations such as France, Turkey and the United States, the term belly dance is now commonly used to include all traditional dances in the Middle East region, including those not geographically located there.

The first belly dancer was a group of traveling dancers known as Ghawazee. These women were considered gypsies in Egypt in the 18th century and were expelled from Cairo during the 1930s, but continued in Upper Egypt and later in the Middle East and Europe. Belly dance was often known as "oriental" dance during this time, and women in Europe became famous for authors and painters who were fascinated by the exotic nature of art.

The genre of belly dancing Raqs sharqi began to develop from the Ghawazee ensemble. Gradually, urban dance became more and more popular, and its performers gradually adapted it and added elements from various styles of folk dance, ballet, Latin dance, and even American marching bands.

Choreography through the ages

While belly dancing is very stylish and flashy with ornate costumes, classical (Tribal) and the original tribal dance require disciplined isolation. Precise minimalist work with every muscle with the help of tightening and relaxing individual parts of the body. For this reason, people with experience in jazz or ballet dance will better master the basic technique of belly dancing, which is easier to learn because it does not need the involvement of so many internal muscles, but its main movement comes from the hips and pelvis along with the chest. The abdominal muscles are no longer as involved there as in Tribal dance.

There are many dance elements in different styles of belly dancing performed around the world, but the classical elements that return over several periods in the history of belly dance are:

Shimmy - vibrating hips using the muscles of the lower back. You can vibrate from front to back or from side to side to create this vibration, and occasionally it is also done in the shoulders.

Waves - smooth, fluid movements throughout the body, including a pulsating chest rhythm and circular twisting of the hips and stomach areas

Hip hits - sharp and fast pulsation of the hips coming out of the body. When performed up to speed, it looks like the pelvis is swinging, but in reality it is the weight of the legs pulsing rapidly alternating that creates a hip illusion.

History of costumes and props

Early belly dance costumes consisted of a tight-fitting bra top, a belt that is low on the hips, and then long skirts or flowing pants. These are usually covered with fringe ornaments, coins, gems or sequins. This historic look, first portrayed by the oldest belly dancers, is often used to this day.

The history of belly dancing also shows a wide range of props that are used around the world. The most common props for belly dancing, which have become very popular with dancers, are fans, cymbals, tambourines, swords, live snakes (the only ones in our e-shop we don't have :-D yet), dance sticks and veils or wings. All this is optional and is left to the discretion of the choreographer and the dancer.

Our women were fascinated by oriental dance probably the most from all over Europe. Why is that so? Hard to say, I personally believe that for women living in our territory, this type of dance is a relief from stereotypes. For many years, our countries were occupied and we were pushed by discipline, forced subordination, the inability to travel and get to know exotic countries. Now, we can travel, but most households still can't afford trips to exotic countries (as intensely as our western neighbors), so for us, eastern countries are still a big unknown, mysterious landscape where a woman looks different, dances otherwise. Oriental dance has so much desire and femininity in it that when a local woman tastes it, she usually succumbs to it. Our folk dances contain many layers of skirts, they are mostly folk group dances and femininity is not so much manifested and admired there as in oriental dances. In the folk dances of our region, women always have their hair tied in braids and maximally decorated with a hat or bow. However, the belly dancers are wearing very bold costumes where a larger part of the body is revealed, the hair is loose and the longer it is and the more the dancer can throw with it, the more captivating her dance is. That is what attracts us to it, we feel free, we feel unfettered, we feel to be a Woman ...

Written by Zuzka for IMIX e-shop